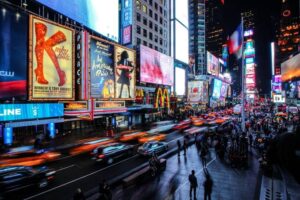 Strategically positioned billboards in New York City can be highly successful for your brand. After all, there’s a reason billboards have been marketing staples for companies just like yours for decades!

But when you advertise in the Big Apple, you have to keep a few key strategies in mind. Even more importantly, you need to know how to leverage billboards for NYC audiences if you want them to be successful. Read on for a breakdown of important tips to consider when designing and launching an effective billboard marketing campaign!

You know the saying: location, location, location! When you advertise using billboards in New York City, you have dozens of high-quality locations to choose from. But choosing the right locations for your target audience members is absolutely vital, especially given the cost of billboard advertisements in the Big Apple.

For example, if your target audience is primarily comprised of rural or upstate New Yorkers, using a flashy digital billboard in Times Square may not give you the most bang for your buck. In contrast, advertising through billboards on several of the major bridges leading into New York City might be more worth your time and money.

You should also consider location carefully because it can affect the overall cost you pay for your billboard marketing campaign.

Consider the Cost When Deciding on Specific Billboards

Speaking of cost, be sure to consider how much each billboard advertisement will eat into your marketing budget before signing up for a dozen different billboard ads. For example, the average cost of a New York City billboard advertisement is $2500 for a four-week campaign. While you can find billboards for less money, many of the most profitable billboard spots will cost you even more than $2500.

With a total of over 2200 billboard locations scattered throughout NYC, you have your pick of potentially profitable locations to place your advertisements. Take a hard look at your marketing budget and decide:

Advertise to Your Audience

Of course, you can’t be successful with billboards in NYC unless you craft compelling, highly converting advertisements to put on their surfaces. In other words, you need to advertise directly to your audience by:

Advertising to your audience means understanding them. Do a lot of market research before putting up your first billboard ad so you don’t waste any money and so your first advertisement is highly successful.

Don’t forget to continue analyzing how your billboards perform relative to each other! For example, if you have five billboard ads up scattered throughout New York City, analyze:

Once you have all this information, you can replace underperforming billboard advertisements with their higher-performing counterparts, thereby maximizing your marketing budget and your campaign’s efficacy.

You Can Switch Things Up Later

Lastly, don’t forget that you can be successful with billboards in NYC by switching things up from time to time. Most billboards are “rentable” for around four weeks, although some billboards are available for longer campaigns.

This is actually a blessing rather than a limitation. When considering the above advice, you can use the four-week time limit to swap out underperforming billboard advertisements with others. Alternatively, you can abandon billboard advertisements that don’t perform well in specific locations. Then you can put extra billboard ads in locations that get more impressions or that reach your target audience members more frequently.

In essence, billboard advertising is never permanent. You can always switch things up and make improvements as you learn more about this unique type of marketing.

Ultimately, launching a billboard marketing campaign in NYC can be highly effective and successful for your brand. Just remember that, like any other marketing effort, you need to tailor your material to your audience and should adjust your billboards’ positions and content as your needs evolve. Good luck!